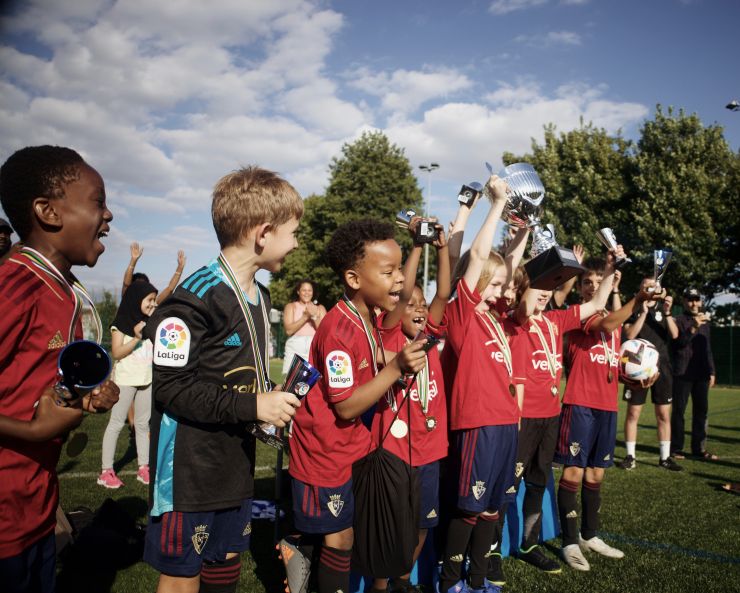 Londoners representing CA Osasuna came out on top after 48 of Bloomsbury Football’s players competed over a four-week period. This was part of LaLiga’s partnership with Bloomsbury Football, supporting their commitment to grassroots football in the UK.

The team of young Londoners London, decked in CA Osasuna kits, triumphed after a four-week tournament against other teams representing Valencia, Tenerife, Eibar, Cartagena and Huesca in eight-a-side fixtures.

The finals, watched by families and friends, plus members of the Bloomsbury Football and LaLiga team, marked the first of many in LaLiga’s partnership with the London-based grassroots football charity.

The LaLiga x Bloomsbury League is the start of a multi-year partnership in which LaLiga is supporting Bloomsbury Football’s pioneering work in the London community, changing the game for young people across the capital and giving them access to affordable football.

Founded in 2018, Bloomsbury Football offers an elite football experience to young people aged between 18 months and 18 years old. The organisation’s financial assistance model means that everyone is welcome, regardless of ability to pay or play. The charity’s activities already reach over 5,000 young people in London a week, and this partnership with LaLiga will engage more of the community.

In addition to providing official kit donated by LaLiga Santander and LaLiga SmartBank clubs for this LaLiga x Bloomsbury Football League, LaLiga via its UK office is also providing training and expertise for Bloomsbury’s staff, and will host Bloomsbury players at LaLiga watch parties from next season.

“We’re so proud to support Bloomsbury Football and to collaborate with them on such an incredible initiative. The past four weeks have been great to be involved in and we’re proud to have played a role in putting a smile on the faces of these young people. We must thank the six LaLiga clubs who’ve helped make this happen, and it is truly unique to see young kids in London represent some of the amazing clubs in LaLiga Santander and LaLiga Smartbank. We’re looking forward to continuing working with Bloomsbury over the coming years and are excited to support the children of London in pursuing their football dreams.” said Javier Del Rio, UK & Ireland delegate at LaLiga