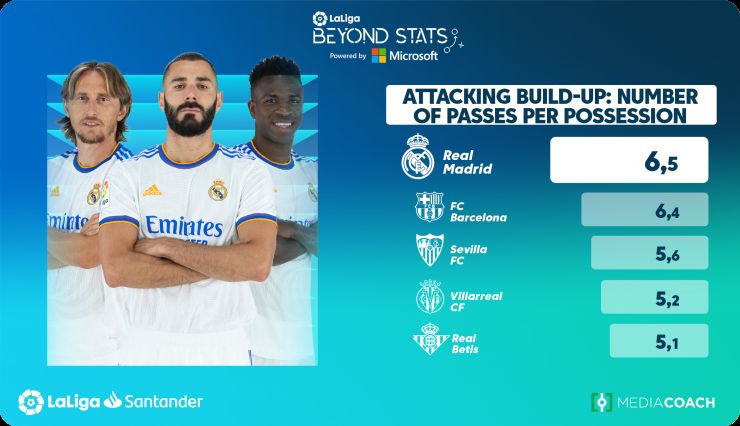 Possession is now far more than just a percentage

With regard to possession percentage, the criteria has developed, become more specific and created various areas of analysis that take things beyond the basic statistic that we all recognise.

If we stop to think about one of the first football-related statistics we came across in our lives, for many of us, possession percentage likely springs immediately to mind. For a good number of years now, virtually every match broadcast features metrics that we now consider to be very much part and parcel of the game.

One look at the LaLiga Santander possession percentage standings reveals that FC Barcelona lie top of the tree with 62.8%, followed by Real Madrid’s 58.7% return, whilst Sevilla land the final place on the podium with 58%. Occupying fourth spot are Villarreal (57%), whilst RC Celta complete the top five with 55.7%. This statistic offers us a percentage figure as to how long each side has possession during the course of a game.

There are no surprises in the teams that we find amongst the top five. They are all sides that we associate with intricate build-up play. However, in the modern game, we don’t just focus on possession percentages in the classical sense, with our analysis encompassing several different possession-related metrics.

Number of players per possession

If we look at the average number of players involved in each possession over the course of the 90 minutes, we discover another metric that relates to a team’s build-up play. The more players involved in an attacking phase, the more intricate the move. In contrast, a team may opt to adopt a more direct approach and this will involve fewer players per possession. As we can see from the number of players per possession ranking in this season’s LaLiga Santander, four of the leading five teams also occupied the top spots in our possession percentage standing.

We’ve just explored how many players are involved in each possession, but what about if we were to explore the number of passes played between those players in each move? These average scores offer us a qualitative insight into a team’s possession phases.

Up until this point, we’ve looked at possession, moves and players and it’s now time to introduce an important factor to the mix in the shape of time. We’re going to identify which teams play the highest number of passes per minute during possession. The ball circulation rate, therefore, allows us to determine how quickly a team moves the ball around, in other words, how fast they manage to make the ball travel.

In this special edition, we’ve sought to offer some context to the performances of your favourite teams through a series of criteria that haven’t been heavily used to date. Real Madrid, Barcelona and Sevilla secure podium finishes across all of the rankings, whilst Atletico, Real Betis, Villarreal and Celta trade places in fourth and fifth spots.

Visit LaLiga Beyond Stats and go deeper into the game with Microsoft and LaLiga!