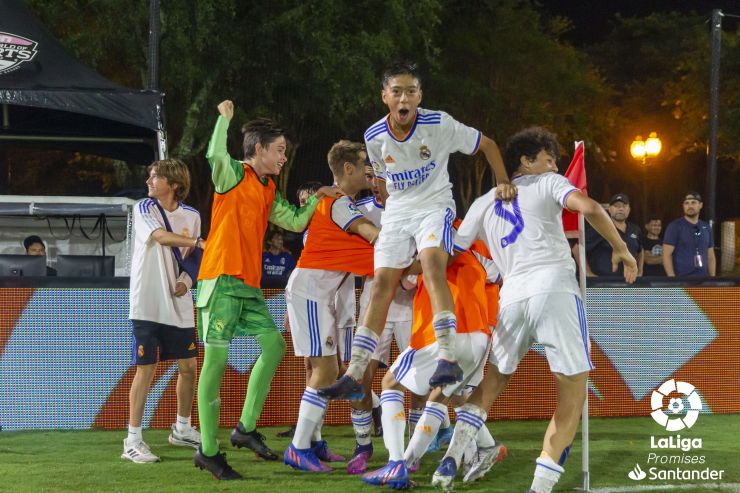 Real Madrid and Atletico booked their places in the final of the 6th LaLiga Promises Santander International Tournament Orlando 2022 following a thrilling day of action on Saturday.

The last set of group games kicked off with a meeting between Atletico and Chivas Guadalajara, a contest in which the Rojiblancos prevailed to tighten their grip at the summit of Group C. Next to take centre stage at Orlando’s ESPN Wide World of Sports Complex were FC Barcelona and Ideasport as the Catalans brushed the Orlando-based outfit aside to land top spot in Group D.

Elsewhere, Sevilla FC and Villarreal CF treated fans in the stands to a rip-roaring encounter. The Andalusians hit the front in a first half in which they were the stronger side, but the second period belonged to the Yellow Submarine, who staged a stunning fightback to finish top of the pile in Group B.

Real Madrid and Inter Milan brought the curtain down on the group-stage action as they went head-to-head for a quarter-final berth. The Blancos made a real statement of intent as they cruised to a 4-0 success over the US side.

The last-eight action began with a blockbuster bout between Atlético and Atlas FC as the two sides, who are both physically strong and well drilled, went all out from start to finish. The Colchoneros ultimately came out on top to become the first side to clinch a semi-final spot after they ran out 3-1 winners. The Madrilenians would meet Valencia CF in the final four after they put Barça to the sword in a 4-0 romp.

On the other side of the draw, Real Betis faced off against Villarreal CF in a contest that pitted two of the tournament’s best footballing sides against each other. There was no separating the teams after the 24 minutes of normal time, with the score tied at 1-1, and so the first semi-final went to the wire with a penalty shootout. The Castellon side held their nerve to convert three of their spot-kicks and advance to the next round.

The clash between Real Madrid and Sevilla FC promised plenty of thrills and spills and it certainly lived up to the billing. The two Spanish representatives served up a high-octane bout that ended goalless, before the Merengues edged the penalty shootout in a 4-3 win.

Atleti and Valencia met in the first semi-final following an afternoon in which the heavens opened in Orlando. The Indios got their noses in front right on the stroke of half-time, but the Che remained very much in the game and levelled matters after the break. The first finalist would ultimately be decided from the spot and the Rojiblancos’ goalkeeper proved to be the hero of the day to steer his side through to the final.

Meanwhile, the other semi-final saw Villarreal take the lead inside the opening minutes, only for Real Madrid to restore parity in the first half, before completing the comeback in the second period following a breathtaking counter-attack.

All of this means that a Madrid derby lies in wait as Real Madrid and Atletico prepare to do battle for the coveted LaLiga Promises Santander Orlando 2022 crown in the showpiece.